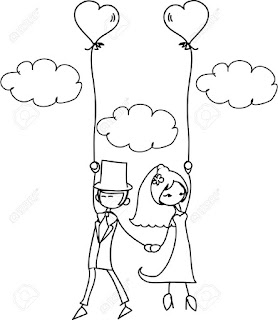 There was a time when I didn't emphasize rehearsals. Mainly because I looked at my job as walking to the front, turning around, and reading. I've come to believe that it's much more than that. A rehearsal gives me the opportunity to reassure the couple that every detail of their nuptials will proceed according to plan, whether that plan is simple or elaborate.

While I prefer to conduct a rehearsal at the same site as the actual wedding, even a run-through off-site has value. It gives the wedding party the chance to find out who they are walking with, where they will be standing, assignments (Who has the rings? Who takes the bouquet? When do you give it back?) and get an idea of how the ceremony will proceed.

Having the rehearsal at the same location as the wedding ceremony gives everyone the additional benefit of seeing exactly where they will be standing, how far they will have to walk during the processional, and little details like where does the best man step to hand the couple their rings? (Answer: behind the bride and groom - in front of the officiant - and take the rings out of the box!). I usually get everyone lined up at the "altar" first, practice the recessional, then turn right around and do the processional followed by a walk-through of the service.

As part of the rehearsal I also spend time instructing the bridesmaids and groomsmen on minutia such as how to line up (in an angled or slightly curved line so that everyone can see the bride & groom; standing at an approximately 45 degree angle); how to walk (woman with her hand in the crook of the man's arm, not linked at the elbows - this makes it easier to walk, especially if there is a big height difference); and how far the couple ahead of them should get before starting to walk; also where the bride & groom should stand during the unity ceremony (behind the table, or at least on the side, so their guests can see what they're doing).

The rehearsal is also a good time to talk about staying relaxed and not getting stressed out about small details. The behavior of ring bearers and flowers girls is often cause for concern. "Kids will be kids" I usually say; whatever they do, your guests will think it's cute. It's usually a good idea to have a plan for where the youngsters will go after they have delivered the pillow with fake rings (DON'T ever give the real rings to a three year-old!) and the flowers.

If the bride and groom will be saying their vows (rather than just responding "I do") I like to make sure that I talk about how the microphone will be handled. I prefer to have a mic on a stand or a boom where I can simply tilt it toward them when it's their turn to talk, so that they don't have to lean in to speak. The deejay can usually adjust the gain to allow the mic to pick up their normal speaking voices.

Once we've run through the ceremony itself, I ask the bride and groom if they would like to do a second run-through. More often than not they are comfortable with once. An exception to this might be if there is an unusual or complicated processional arrangement. Finally I ask the wedding party if they have any questions. There have been times where attendants have asked very good questions, causing me change my thinking on something we were doing, but it's important to stay focused on what we're there to do and not get distracted by aspects of the wedding day, like limo rides and the reception. Before I leave I make arrangements with the two witnesses to meet with me get the license signed.

And that's it. A well-run rehearsal with a cooperative group will take a half hour or less. See you all tomorrow for the wedding!