At What Point Should You Start Drinking on Your Wedding Day? 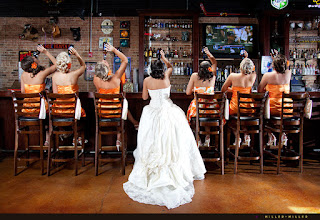 A wedding, while for some, a sacred event, for others a civil contract, for still others, the fulfillment of a long-held promise, but for a lot of people, it's also a party!

So, when should you start drinking?
Multiple Choice:
Notice that I didn't say "never". Personally I enjoy an adult beverage, but as the officiant I don't consume any alcohol (or any other intoxicants for that matter) before the ceremony since I am being paid to speak coherently. But what about the groomsmen and bridesmaids? What about the bride and groom? For a lot of people a few pre-ceremony "cocktails" with "the boys" or "the girls" seems to be the rule rather than the exception, but like a national producer of fine lagers says: "Drink Responsibly". So what does that mean?

It helps if someone else gets you to the venue and you don't have to drive, but avoiding a DUI isn't the only consideration. Unless your wedding is a small intimate affair in your backyard, your wedding can be considered a bit of theater - you invited a bunch of people to watch you get married! Like I mentioned earlier, as an officiant I make it a rule to not drink at all before the ceremony; I'm not suggesting that the bride and groom and wedding party abstain too, but consider that you're on display as well. Sure, groomsmen and bridesmaids, after the processional, are tasked with just standing there looking pretty, responsible for being well-dressed scenery. If you're swaying or looking a little green due to an excess of alcohol, you're no longer invisible, but are now a distraction from the bride and groom.

And the bride and groom, well, you two are the center of attention. Passing out will surely embarrass your soon-to-be spouse, your in-laws and parents, and make continuing the ceremony problematic.

Okay, so the reception is safe, right? Kinda-sorta.

You're still somewhat on display, even though some inebriation is expected. All those people that you invited? They're still there. Most of them gave you stuff (you know, wedding gifts) and you really should be nice to them.

A few years ago I showed up for a wedding to find the bride crying because the groom was stinkin' drunk. Not tipsy, but stumbling, slurring drunk. He interrupted the ceremony incoherently a few times and passed out at his own reception. No one was impressed.

So what's the bottom line? Know what you can handle, know your limit and try to not approach that limit. Other than that, have fun!
at July 11, 2017