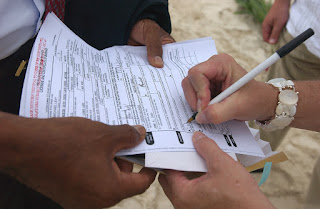 Who hasn't seen this scenario in some movie? Couple has to get married; there happens to be a minister handy, he says a few words, they say "I do" and voila! they're married. My favorite was a Jim Belushi sitcom where Jim found out that the minister who had just performed his sister-in-law's wedding ceremony was "defrocked", so the marriage wasn't legal. So Jim gets online, gets ordained, and tricks the couple into saying "I do" as he sings a song with the band. What's missing in these scenes? A marriage license.

In Nebraska, and as far as I know everywhere else in the United States, a couple who wants to get married must first procure a marriage license issued by some arm of the government, usually the county clerk. Any ceremony carried out without a marriage license, signed by the officiant and two witnesses, even it's done by an otherwise legitimate officiant, is not a legal marriage. Your rabbi, minister, imam, even the Pope or the Dalai Lama can say all the words, and give all the appropriate blessings, but the state will not recognize that a marriage has taken place if there is no marriage license.

In Nebraska, you can go to any county courthouse in the state to get your marriage license - you are not limited to the courthouse in the county where you are getting married. (Several times this year we have received calls from people who thought that officiants issued marriage licenses - we do not!). You have one year to use your license (this varies from state to state, but in Nebraska it's one year). On the day of your wedding you will have two witnesses sign the license in addition to the officiant, who will deliver it to the county clerk who issued it. The county then sends it to the Nebraska State Vital Records Department. Now you're marriage is registered.

Getting a marriage license in Nebraska is a relatively quick and easy procedure. The link to Lancaster County follows, for your county, just search for "County Clerk marriage license" in the county where you live